In the NHL right now, there are so many superstars: Sidney Crosby, Evgeni Malkin, Alexander Ovechkin, Connor McDavid, and Johnny Gaudreau to name a few. However, every season, the NHL has to hand out the Hart Memorial Trophy, the MVP of the season. This season, the superstars have been phenomenal but there are some young players that are establishing their name in the league: Nikita Kucherov and William Karlsson in particular. We’ll be looking at their growth and if they should be in the Hart Trophy conversation.

In this analysis, I am looking at the games during the “sludge” of the season – games 30 to 54 in my mind. I chose that game range because it encompasses the All-Star Break. Usually, there are a few trends about players entering and exiting the All-Star Break. Usually, if a player is on a hot streak entering the break, they sputter coming out of it. The opposite also usually occurs. Additionally, this game span is usually shows growth in a player’s skills.

Now let’s take a look at Nikita Kucherov. Last season, he had an insane season, scoring 40 goals and assisting on 45, amassing 85 total points. However, his team, the Tampa Bay Lightning failed to make the playoffs. Currently, he’s on pace for 43 goals and 60 assists (103 points). Even with his scoring touch, he does have some flaws. First, he’s small for the NHL; he is 5’11” and weighs 178lbs. Also, his play style is dominated by his size – an outside, peripheral game. With these downsides, he makes up for them with an amazing shot, quick and strong skating, soft hands, effective dekes, versatility to play on both sides of center, and an extremely high offensive IQ.

With some information on Kucherov, let’s take a look at William Karlsson. Last season, he played for the Columbus Blue Jackets and had 6 goals and 19 assists in 74 games. During the summer, he was picked up by the Las Vegas Golden Knights in the expansion draft. Now, he has 29 goals (tied 3rd in the league) and 47 points (3rd on his team). This season, he’s on pace to score 44 goals have a total of 71 points. Even though he is having a breakout season, he has his flaws: he’s small for his size. Even though he is 6’1″, he only weighs 189lbs. His lack of size, however, helps him in other areas. He is extremely quick on his skates. Furthermore, he has a very good hockey sense, and has near-elite passing skills. Additionally, he is solid defensively and plays a full 200 ft. game. Finally, he is elusive due to his light weight.

Back to the 25 game span. During this span, Kucherov and the Lightening went 16-8-1. I noticed a few trends about his shooting during it. During the middle of the game span, he decreased his shot volume, which led to a 10 game goal scoring drought. This trend can be seen in the following graph: 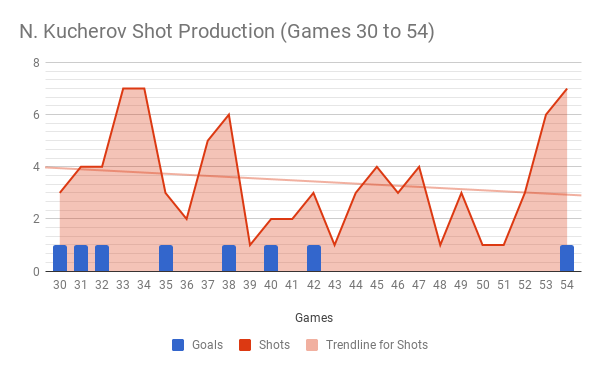 Let’s compare this shot volume to Karlsson’s. He does not take, on average, as many shots as Kucherov, but he increased his shot volume. This led to an increase in scoring, especially goal scoring. This trend can be seen below: 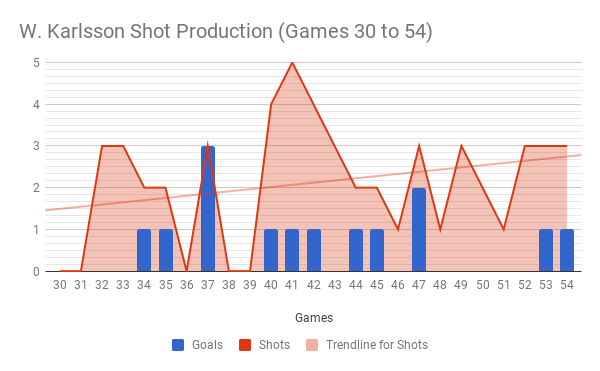 With a change in shot production, there should also be a change in Corsi. Corsi is a stat which determines if the player is on ice for more offense or defense. If the Corsi value is above 50, then they are on the ice for more offense. Otherwise, they are once the ice for more defense. Kucherov, a highly offensive player, should have a Corsi above 50 and closer to 55 or 60 most nights. However, he has a decreasing Corsi trend during the 25 game span, shown below: 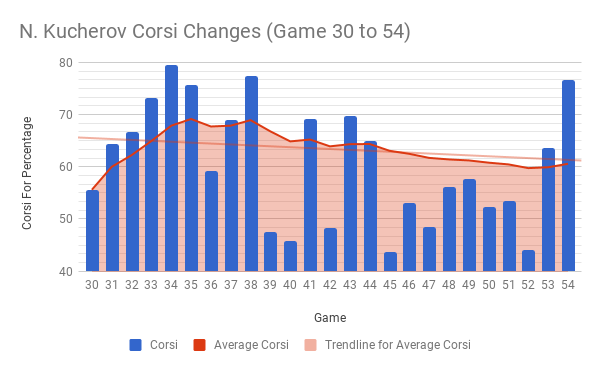 With Kucherov’s decrease in shooting and Corsi, we should see that Karlsson, with an increase in shots, has an increasing trend in Corsi. This inference does match his trend, shown below: 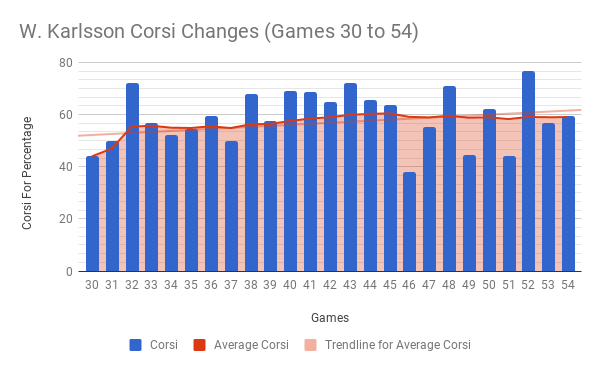 With both of these changes, we should see that Karlsson should have more growth in scoring goals compared to his point growth, not Kucherov. When looking at the scoring data, we see that this trend (shown in the graphs below) is true. 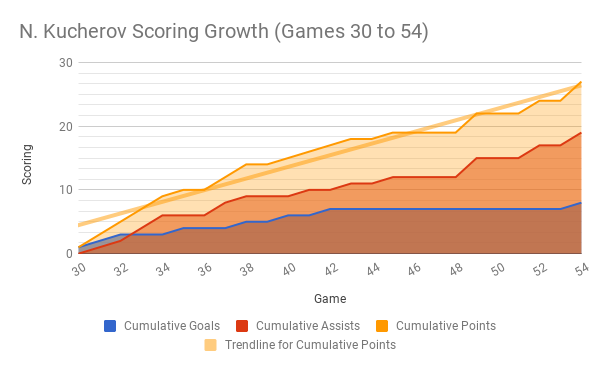 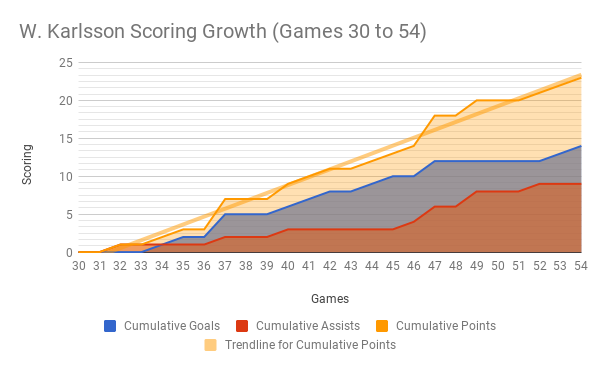 Karlsson scored 9 goals with 14 assists while Kucherov scored 8 goals with 19 assists. Even though Karlsson was outscored by Kucherov, his ratio of goals to assists was greater than Kucherov’s ration. With this growth comparison,  we can compare whether Karlsson and Kucherov are realistic candidates for the Hart Trophy.

In my mind, the Hart Trophy goes to the player that is most valuable to their team. Kucherov plays on a stacked Lightning team with Stamkos, Namestnikov, Gourde, Point, and Johnson. The Golden Knights do not have the skilled depth that the Lightning have. So, removing Karlsson from Vegas would leave a gaping offensive and defensive hole, while removing Kucherov from the Lightning would decrease the offense but the Lightning still have scoring depth. So, in my mind, with the above growth, the Hart would go to Karlsson over Kucherov.