LaMarcus Aldridge has been a conundrum for San Antonio Spurs fans for the past couple seasons. When he signed a 4 year $84 million deal in the 2016 free agency, there were high hopes for his offense. However, in his first two season with the Spurs, his offense seemingly fell off. After the 2017 season and a conference finals exit when Kawhi Leonard went down with an ankle injury versus the Golden State Warriors, Aldridge was furious with his situation. By this time, it was apparent to coach Gregg Popovich that LMA was furious with something about his seemingly fool-proof offensive system. During the 2017 summer, Popovich and Aldridge met for dinner and had meetings, and discussed LMA’s future. During these dinners, LMA requested a trade away from the Spurs. Popovich admits that he was shocked, and said “Whoa, nobody’s ever said that to me before.” After long discussions with Popovich, LMA soon realized that he did nothing wrong – Popovich had over-coached him. This realization for Popovich humbled him as he took a 9-year veteran and tried to coach him like a rookie or second year player.

After the summer discussions, Popovich changed his offensive system to fit LMA’s more sedentary, post-like offensive game, and the results have been astounding for Aldridge. He is putting up career numbers and his confidence is through the roof.

The revival of Aldridge can be seen in multiple areas. For starters, Aldridge is scoring more. This season, LMA is averaging 22.4 points per game, while in 2016-17 he averaged 17.3 and 2015-16 he averaged 18. From 1/8/18 to 2/10/18 he averaged 22.3 points, just 0.1 points off of his season average. Additionally, you can see his confidence increase by looking at the number of shot attempts he puts up. In the 15 game span I looked at this season, he averaged just over 17 field goal attempts per game. This is much better than the 2017 game span I looked at, where he averaged a little less than 15 field goals. The trend of this can be compared with these two graphs: 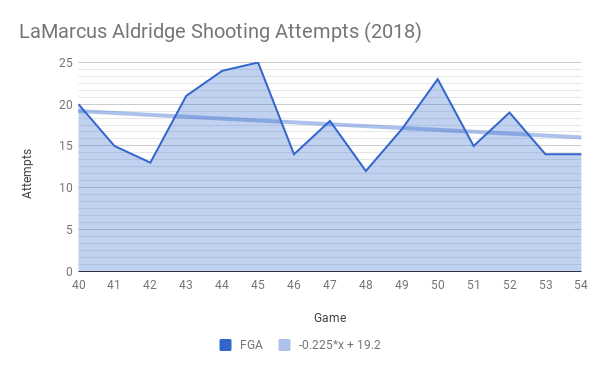 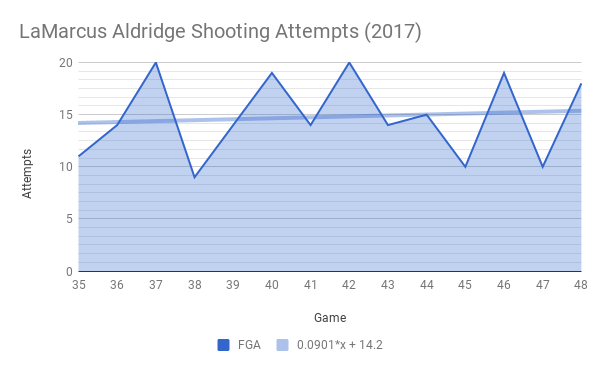 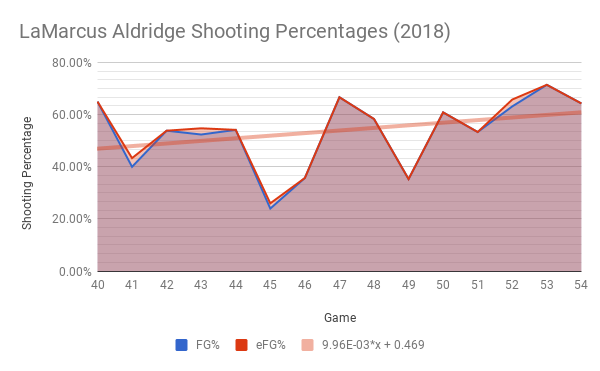 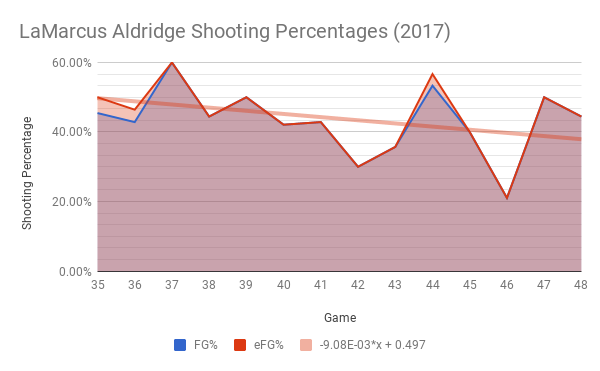 However, eFG does not look at free throws, something which is crucial for a big man like Aldridge. So, I created eFG+%. This takes into account free throws at a very basic level. The formula is as follows:

This statistic is sometimes accurate, but has been seen to over-value free throws in some occasions. Here is a graph depicting the difference between eFG and eFG+ for LaMarcus Aldridge in the 2018 game span. 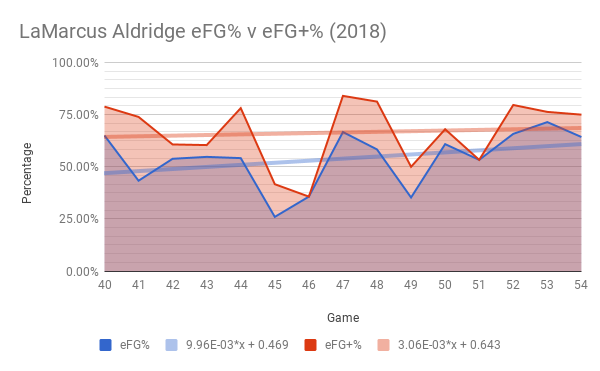 With these trends being seen in Aldridge’s game, it’s time we took to the future. Aldridge is currently on a career year. But how long will he stay on this path? I decided to try 2 methods of predicting his average points scored over his next 5 games.

The first method I used is combining 3 types of averages. The first type of average is a standard average: let’s call it Normal Average. The second type of average is a moving average – call it Moving Average. A moving average starts by averaging values over a shortened span and moving the span down over time. The final average is a weighted average – call it Weighted Average. This weighted average weighs every game differently. His previous game is weighed at 100 and then every previous game is weighed 5 less, until we reach 0. Every game after that is weighed 0. So the formula for this predictive average is:

Here is a comparison of the prediction methods: 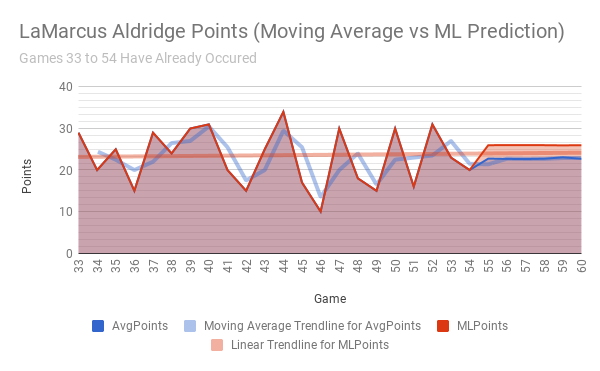 As you can see, the MLPoints trend is the linear trend line since it does use basic machine learning. However, the predictive average (in blue) is about 3 points below the MLPoints trend. Currently, the accuracy of these models cannot be tested since LMA hasn’t played his next 5 games.

In conclusion, LaMarcus Aldridge has seemingly re-found his scoring touch and it is showing in all aspects of this game.

If you would like to see the podcast episode on LaMarcus Aldridge, you can find it on YouTube here.